History of the College

BHOLARAM SHIBLAL KHARAKIA (B.S.K) College, Maithon was established on 01-05-1966 after grant of affiliation by Ranchi University, Ranchi on 11-04-1966 up to Pre-university and Degree part one level. The affiliation was upgraded up to degree part two, Arts and Commerce in 1968.From 1970 teaching up to Degree honours level was permitted in Political Science and History. Gradually honours teaching in all subjects of Arts, Science and Commerce started by 1985-1986.

Initially, the college was running in the premises of D.V.C Plus Two High School. However it shifted to its present campus in 1969 in the newly constructed building provided by the donor. From the very beginning, the college is a co-educational institution .It runs in two shifts (Morning & Day).

Late Shiv Chandra Prasad, the founder principal of the college, showed great administrative ability in bringing the college to a competitive level. Since then, a number of Principals have contributed their might in moulding the future of the college.

The Maithon Dam project belongs to the D.V.C which was established in 1948 for the development of the Damodar valley area. By 1966 the Nirsa-Kumardubi-Chirkunda area had already become an industrial hub. Plants of the McNally Bharat Limited, Kumardubi Engineering Works, K.F.S and a large number of ceramic factories manufacturing fire bricks were present. The collieries of Nirsa-Mugma-Kumardubi belt (now it is a part of Eastern Coalfield Limited and Bharat Coking Coal Limited) were already functioning. Besides, there was a sizeable population of Santhal tribes in the area. However, there was no college for higher education in the locality. B.S.K.College, Maithon was established to cater to the needs of higher education in this very important belt of Damodar valley.

The location of the college on the borders of Jharkhand and West Bengal is also significant. The cultural diversity of India gets reflected in the language adopted by different states as medium of teaching in schools and colleges. A large number of students from West Bengal come to this college for availing the opportunity of Hindi medium education. The number of students belonging to minority community (both boys and girls) has phenomenally increased in recent years.

The college enjoys excellent communication facilities due to its location by the side of the G.T.Road (NH-2) which is now a part of the Golden Quadrilateral. It is in the process of being converted into six-lane Super Highway. Dhanbad is 45 km away towards the West and Asansol 27 km away towards the East. Railway communication is not bad either. Kumardhubi station on the Howrah – Delhi Grand Chord Line is only 2 km south of the college. Chittaranjan station on the Howrah-Patna-Delhi main line is 19 km away.

The college has entire necessary infrastructure for further growth. The college is in possession of about 21 acres of land for its various needs. Water, power, hostel and banking facilities are available. The semester system (under CBCS) adopted by the university is being implemented. Various other development measures will be implemented as per the guidelines of the University. This educational institution is destined to play a bigger role in the future.

College at a Glance

The vision of Bholaram Shivlal Kharakia College is to enlighten as many students as possible through higher education apart from rendering social upliftment programmes. It is the vision of the college to help students develop a healthy outlook and positive thinking. It aims to make students creative. Providing a disciplined environment, the college aims to foster positive growth of students. The college tries to provide a kind of education that will promote human values, professionalism and a scientific outlook in all sections of students including scheduled tribes, scheduled castes, other backward communities and religious minorities. The college has always paid special attention to female students ,their needs and welfare.

1.To provide high quality education to students and foster their multi-     faceted development.
2.To provide and promote inclusive education for all.
3.To organize academic programmes based on local as well as national     requirements.
4.To have a curriculum that is student -centric so that students are able to     harness their potential to the maximum.
5.To foster education, peace and justice in students.
6.To make students aware of their social responsibilities.
7.To help students learn to respect the dignity of every individual. 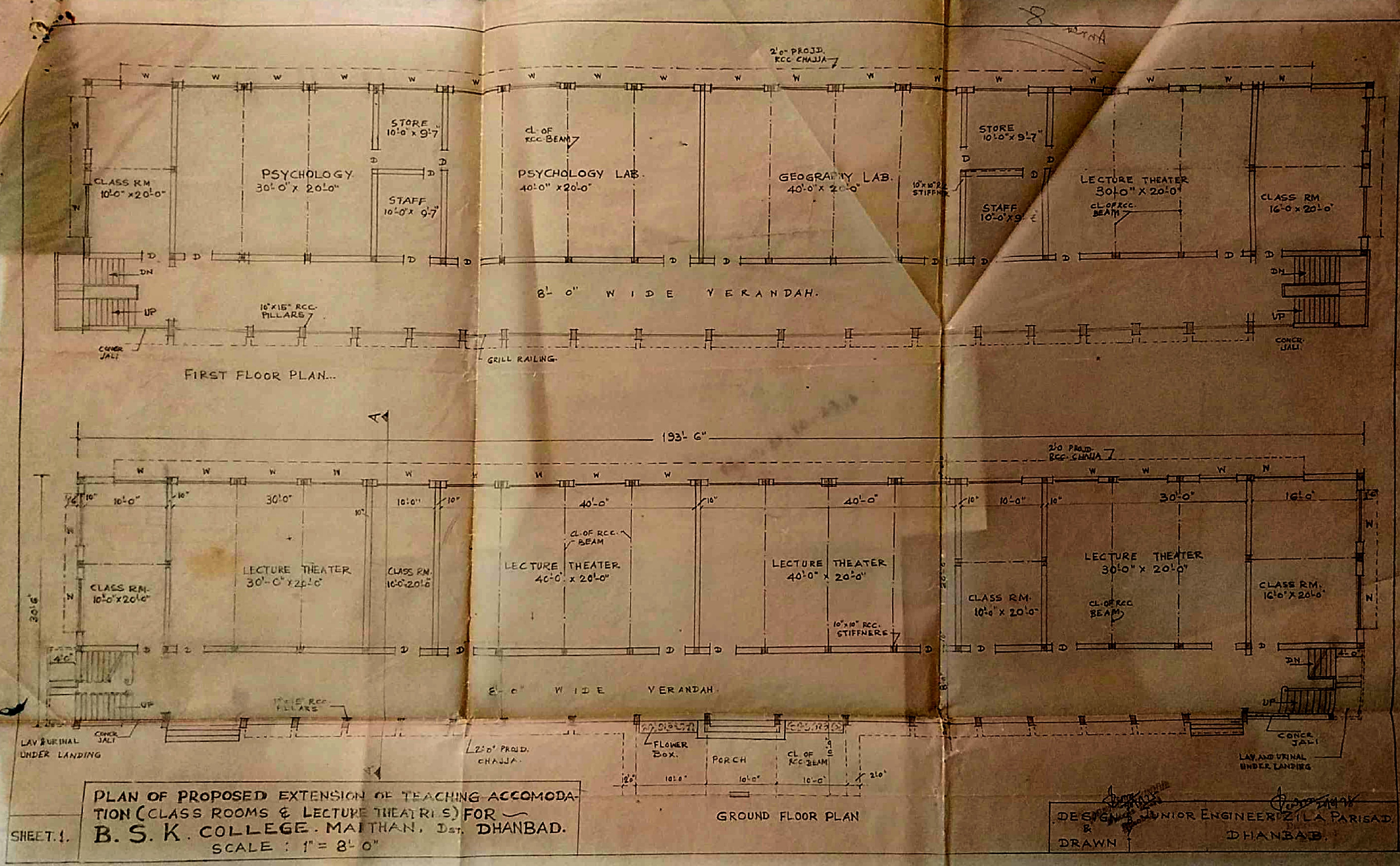 The B. S. K. College campus is nestled in the Maithan area in Dhanbad. A Master Plan ought to take cognizance of the needs of the site as well as the requirements of the College. The B. S. K. College Master plan, path breaking in its vision and ambitious in implementation, prepares for just that. This particular site at Maithan posed several challenges. The master plan was developed after due consideration of environmental impact. It respects the natural flowers throughout the site and breaks fresh ground for promoting sustainable development.

The B. S. K. College campus is designed as a walking campus without motor vehicles. To make it possible for people to walk in the heat , a shaded and rain protected pedestrian spine linking all major areas in the College, is in development. Students will be able to walk to the academic buildings under shade and facilities will be located along the pedestrian spine, making sure that it remains active and safe all through the day. Motor vehicles will be parked in a parking lot near the entrance.

Students are the focus of this campus layout. The views from each hostel rooms and classrooms are designed so as to bring the feeling of nature into interior spaces. One of the natural depressions in the site has been developed as the sports arena.

Copyright © 2022 B. S. K. College crafted with in Gen Next Information Technology. All Rights Reserved